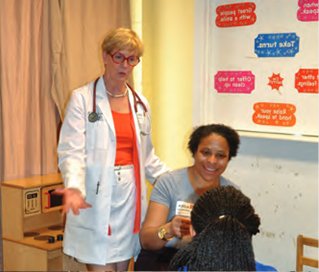 A new project for Dallas County Medical Society Alliance and Foundation is creating excitement in the organization to get moving. With the pandemic restraining us, we can only plan for the future. Our plans include doing as much for the school as we can. Mustering the volunteer and funding support will be one of the major steps. With success,  our scenario is to provide health screening, immunizations as needed, health education, volunteer mentors and tutors for early reading, Texas Medical Association programs such as Hard Hats for Little Heads and Walk With a Doc.

This school has grown substantially over the last century plus, but it had a colorful and interesting beginning. About the year 1856 in the eastern part of Dallas County, W.C. Hunnicutt founded what was probably the first school in the settlement of Dallas. The first students that attended this school were from the Ferguson, Hunnicutt, and Rupard families. Tuition paid by the students provided the $6.07 salary for the teacher. The Motley children were provided a trail when their father plowed a furrow through the woods for the children to follow. The school continued at the location in the eastern part of Dallas County until the year 1870, when a team of mules was hitched to the building and pulled it to what is now the west side of Lotti Road, near the old Bayles home. The name was changed to Bayles at that time.

The school, Pre-K through 5th grade, now has over 600 students and is almost entirely minority. Over 40% have limited English proficiency. The Ferguson Road Initiative has garnered a lot of neighborhood attention for the school. It will be a pleasure to work with its faculty and students in an area not so far from our Swiss Avenue headquarters.